Pliers is a Python package for automated extraction of features from multimodal stimuli. It provides a unified, standardized interface to dozens of different feature extraction tools and services--including many state-of-the-art deep learning-based APIs. It's designed to let you rapidly and flexibly extract all kinds of useful information from videos, images, audio, and text.

You might benefit from pliers if you need to accomplish any of the following tasks (and many others!):

Each of the above tasks can typically be accomplished in 2 - 3 lines of code with pliers. Combining them all--and returning a single, standardized, integrated DataFrame as the result--might take a bit more work. Say maybe 5 or 6 lines.

In a nutshell, pliers provides an extremely high-level, unified interface to a very large number of feature extraction tools that span a wide range of modalities.

If you use pliers in your work, please cite both the pliers GitHub repository (http://github.com/tyarkoni/pliers) and the following paper:

The official pliers documentation is quite thorough, and contains a comprehensive quickstart doc (also available below), user guide and complete API Reference.

For the latest release:

Or, if you want to work on the bleeding edge:

By default, installing pliers with pip will only install third-party libraries that are essential for pliers to function properly. These libraries are listed in requirements.txt. However, because pliers provides interfaces to a large number of feature extraction tools, there are literally dozens of other optional dependencies that may be required depending on what kinds of features you plan to extract (see optional-dependencies.txt). To be on the safe side, you can install all of the optional dependencies with pip:

Note, however, that some of these Python dependencies have their own (possibly platform-dependent) requirements. For example, python-magic requires libmagic (see here for installation instructions), and without this, you’ll be relegated to loading all your stims explicitly rather than passing in filenames (i.e., stim = VideoStim('my_video.mp4') will work fine, but passing 'my_video.mp4' directly to an Extractor may not). Additionally, the Python OpenCV bindings require OpenCV3--but relatively few of the feature extractors in pliers currently depend on OpenCV, so you may not need to bother with this. Similarly, the TesseractConverter requires the tesseract OCR library, but no other Transformer does, so unless you’re planning to capture text from images, you’re probably safe.

While installing pliers itself is usually straightforward, setting up some of the web-based feature extraction APIs that pliers interfaces with can take a bit more effort. For example, pliers includes support for face and object recognition via Google’s Cloud Vision API, and enables conversion of audio files to text transcripts via several different speech-to-text services. While some of these APIs are free to use (and virtually all provide a limited number of free monthly calls), they all require each user to register for their own API credentials. This means that, in order to get the most out of pliers, you’ll probably need to spend some time registering accounts on a number of different websites. More details on API key setup are available here.

A detailed user guide can be found in the pliers documentation; below we provide a few brief examples illustrating the flexibility and utility of the package. An executable Jupyter Notebook containing all of the examples can be found here.

This first example uses the face_recognition package's location extraction method to detect the location of Barack Obama's face within a single image. The tools used to do this are completely local (i.e., the image isn't sent to an external API).

We output the result as a pandas DataFrame; the 'face_locations' column contains the coordinates of the bounding box in CSS format (i.e., top, right, bottom, and left edges).

What if we want to run the face detector on multiple images? Naively, we could of course just loop over input images and apply the Extractor to each one. But pliers makes this even easier for us, by natively accepting iterables as inputs. The following code is almost identical to the above snippet. The only notable difference is that, because the result we get back is now also a list (because the features extracted from each image are stored separately), we need to explicitly combine the results using the merge_results utility.

Note how the merged pandas DataFrame contains 5 rows, even though there were only 3 input images. The reason is that there are 5 detected faces across the inputs (0 in the first image, 1 in the second, and 4 in the third). You can discern the original sources from the stim_name and source_file columns.

The above examples use an entirely local package (face_recognition) for feature extraction. In this next example, we use the Google Cloud Vision API to extract various face-related attributes from an image of Barack Obama. The syntax is identical to the first example, save for the use of the GoogleVisionAPIFaceExtractor instead of the FaceRecognitionFaceLocationsExtractor. Note, however, that successful execution of this code requires you to have a GOOGLE_APPLICATION_CREDENTIALS environment variable pointing to your Google credentials JSON file. See the documentation for more details.

Notice that the output in this case contains many more features. That's because the Google face recognition service gives us back a lot more information than just the location of the face within the image. Also, the example illustrates our ability to control the format of the output, by returning the data in "long" format, and suppressing output of columns that are uninformative in this context.

Here we use the VADER sentiment analyzer (Hutto & Gilbert, 2014) implemented in the nltk package to extract sentiment for (a) a coherent block of text, and (b) each word in the text separately. This example also introduces the Stim hierarchy of objects explicitly, whereas the initialization of Stim objects was implicit in the previous examples.

Treat text as a single block

Extract chromagram from an audio clip

We have an audio clip, and we'd like to compute its chromagram (i.e., to extract the normalized energy in each of the 12 pitch classes). This is trivial thanks to pliers' support for the librosa package, which contains all kinds of useful functions for spectral feature extraction. 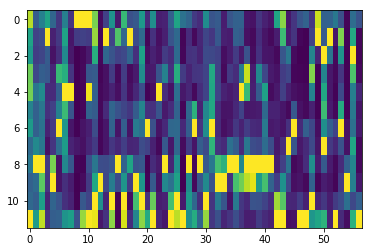 So far all of our examples involve the application of a feature extractor to an input of the expected modality (e.g., a text sentiment analyzer applied to text, a face recognizer applied to an image, etc.). But we often want to extract features that require us to first convert our input to a different modality. Let's see how pliers handles this kind of situation.

Say we have an audio clip. We want to run sentiment analysis on the audio. This requires us to first transcribe any speech contained in the audio. As it turns out, we don't have to do anything special here; we can just feed an audio clip directly to an Extractor class that expects a text input (e.g., the VADER sentiment analyzer we used earlier). How? Magic! Pliers is smart enough to implicitly convert the audio clip to a ComplexTextStim internally. By default, it does this using IBM's Watson speech transcription API. Which means you'll need to make sure your API key is set up properly in order for the code below to work. (But if you'd rather use, say, Google's Cloud Speech API, you could easily configure pliers to make that the default for audio-to-text conversion.)

A common scenario when analyzing video is to want to apply some kind of feature extraction tool to individual video frames (i.e., still images). Often, there's little to be gained by analyzing every single frame, so we want to sample frames with some specified frequency. The following example illustrates how easily this can be accomplished in pliers. It also demonstrates the concept of chaining multiple Transformer objects. We first convert a video to a series of images, and then apply an object-detection Extractor to each image.

The resulting data frame has 41 columns (!), most of which are individual object labels like 'lego', 'toy', etc., selected for us by the Clarifai API on the basis of the content detected in the video (we could have also forced the API to return values for specific labels).

So far we've only used a single Extractor at a time to extract information from our inputs. Now we'll start to get a little more ambitious. Let's say we have a video that we want to extract lots of different features from--in multiple modalities. Specifically, we want to extract all of the following:

We've already seen some of these features extracted individually, but now we're going to extract all of them at once. As it turns out, the code looks almost exactly like a concatenated version of several of our examples above.

The resulting pandas DataFrame is quite large; even for our 9-second video, we get back over 3,000 rows! Importantly, though, the DataFrame contains all kinds of metadata that makes it easy to filter and sort the results in whatever way we might want to (e.g., we can filter on the extractor, stim class, onset or duration, etc.).

Multiple extractors with a Graph

The above code listing is already pretty terse, and has the advantage of being explicit about every step. But if it's brevity we're after, pliers is happy to oblige us. The package includes a Graph abstraction that allows us to load an arbitrary number of Transformer into a graph, and execute them all in one shot. The code below is functionally identical to the last example, but only about the third of the length. It also requires fewer imports, since Transformer objects that we don't need to initialize with custom arguments can be passed to the Graph as strings.

The upshot of all this is that, in just a few lines of Python code, we're abvle to extract a broad range of multimodal features from video, image, audio or text inputs, using state-of-the-art tools and services!