The data sources we currently support:

Test files are written in the YAML format. See examples of all different datasources in src/test/resources/. The schema is as follows:

Queries must have unique names. This name is used as a namespace for all the values returned from the query. In the above example, if the name of the query was "Analytics" and it stored a column called "count", then you would be able to use this in your test asserts as "Analytics.count".

If you want a test in the tests section to warn only instead of failing, you can set the optional key warnOnly to true. See here for an example.

Validatar can run a single test file or a folder of test files. Use the --help option to see more details or refer to the Help section below.

This section describes the asserts that you can write in the test section in a Validatar test. Validatar assertions are quite flexible, allowing for the following operations on your data:

A Validatar assertion is an expression similar to ones in C or Java where binary operations from above can combined with parantheses etc to produce an expression that evaluates to true or false. An assertion can optionally contain a where clause that can filter or join multiple datasets. This where clause is provided after the expression and its syntax is the same as the assert itself. So you can leverage the full power of Validatar's assertion expressions to filter and join your datasets as well. See below for examples.

Your assertion can omit the where clause and simply assert using the operations above. For the examples below, let us pretend we had the following two queries, A and B, that were run against Hive and produced the data as below.

Validatar would be modeling the data as two tables, A and B with the columns and their values as shown above.

This assert is making sure that our views and clicks columns only contain positive values. This would fail if any cell contained a negative number.

This assert checks to see where the ratio of clicks to clicks and views is less than 5% or the clicks are greater than 100 for the 20170101 date. Only the A dataset is used and the where clause is used as a way to filter the dataset to only use the rows where A.date is "20170101". For those rows, the assertion is applied.

This assert uses the where clause to perform a cartesian product of A and B and picks all the rows where the country is the same (inner join on country) and the continent is not "as". For these rows, it checks to see the value for A.views is within the corresponding value in B.expected by the corresponding B.threshold percentage. For example, "us" will have approx(10000, 10090, 0.01) performed, which is true.

You can find this failing test suite if you are interested in playing around with it here (src/test/resources/csv-tests/test.yaml.

The Validatar assertion grammar is written in ANTLR and can be found here if you're interested in the exact syntax.

Validatar by default uses the JUnit XML report format to write your test results in a JUnit XML file that you can publish. If you have a SMTP server, you can also generate a pretty HTML E-Mail report to mail out to a list of recipients by changing the report-format setting to --report-format email. 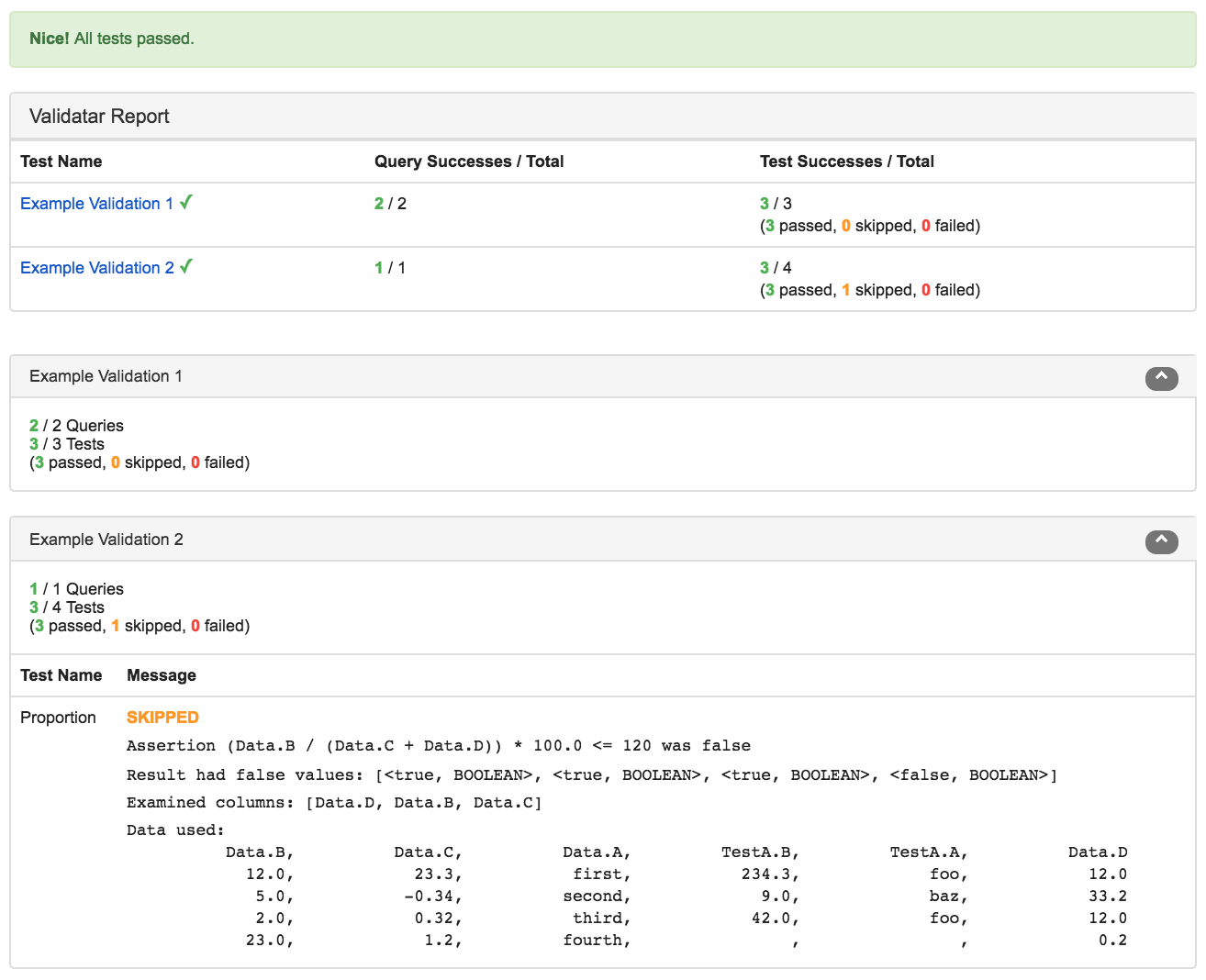 If you want to only generate a report if there were failures in running your queries or tests (including tests that were set to warn only), pass the report-on-failure-only true flag when launching Validatar.

You may want queries, asserts or query metadata to use a specific date column, or some other changing parameter. For this, we have a parameter substitution feature.

The query part of a Hive test is just a HiveSQL statement. We recommend that you push all the heavy lifting to the query - joins, aggregate results etc. We use Hive JDBC underneath to execute against HiveServer2 and fetch the results. We support hive settings at the execution level by passing in --hive-setting arguments to Validatar.

Some mock tests can be found in src/test/resources/sample-tests/tests.yaml.

The query part of a Pig test is a PigLatin script. You can register your UDFs etc as long as you register them with the full path to them at runtime. We use PigServer underneath to run the query. You can provide the alias in the script to fetch your results from (or leave it to the default). Setting the exec mode and other pig settings are supported.

Validatar is currently compiled against Pig-0.14. Running against an older or newer version may result in issues if interfaces have changed. These are relatively minor from experience and can be fixed with relatively minor fixes to engine code if absolutely needed. Feel free to raise issues or you can always tweak the Pig engine and plug it into Validatar.

Some mock tests can be found in src/test/resources/pig-tests/sample.yaml.

The metadata for the query is used to define the REST call. We currently support setting the method (defaults to GET), the body (if POST), timeout, retry and custom headers.

This execution engine exists essentially a catch-all for any other type of Big Data datasource that has a REST interface but is not natively supported in Validatar. But if you feel like it should be in Validatar, feel free to create an issue and we'll look into supporting it.

Some mock tests and examples can be found in src/test/resources/rest-tests/sample.yaml.

CSV (and other delimited text data)

This execution engine lets you load static data from a file or by defining it in your test YAML file. This is provided to make it easy for to load expected data to run assertions against your actual data. For instance, in the examples shown above, Query B with the thresholds for the various countries could be defined as a static dataset and Query A could actually be the result of a query on your Big Data that you are validating.

Some mock tests and examples can be found in src/test/resources/csv-tests/sample.yaml.

Validatar is available on JCenter/Bintray. You can download the artifacts (you will need the jar-with-dependencies artifact to run Validatar) directly from JCenter

The JARs should be sufficient for usage but if you need to depend on Validatar source directly. You will need to point your Maven or other build tools to JCenter.

Use hadoop jar validatar-jar-with-dependencies.jar com.yahoo.validatar.App --help (or -h) for Help

Hive needs the JDBC uri of HiveServer2. Note that the DB is in the URI.

Do not add it if your queries use the

format. Instead, you should leave it out and have ALL your queries specify the database.

Pig parameters are not supported in the pig query. Instead, use our parameter substitution (see below).

Running REST tests require no other dependencies and can be launched with Java instead of hadoop jar.

Engines, report format generators and test suite parsers are all pluggable. You can implement your own extending the appropriate interfaces below and pass them in to Validatar to load at run time by placing it in the classpath. If you wished to have a report generated and posted to a web service, you could do that! Or vice versa to read test suites off of a webservice or a queue somewhere. Refer to the options below to see how to pass in the custom implementations using the custom-engine, custom-parser, custom-formatter options.

Feel free to reach out to us if you run into issues. You are welcome to open any issues. Pull requests are welcome!

We list the complete help output from Validatar for reference here:

All contributions, ideas and feedback are welcome! To run and build Validatar, you need Maven 3 and JDK (1.8.60+ for Nashorn). You can use the make commands in the Makefile to run tests and see coverage (need a clover license) etc.