This project contains example code for the clarity replay parser.

Clarity 2 uses an event based approach to replay analysis. To use it, you have to supply one or more processors to clarity. A processor is a simple POJO, that you enrich with annotations, which tell clarity what kind of data you want to receive.

This simple yet fully working example prints all messages from all chat (Source 2):

The main method does the following:

All provided examples can be build with Maven. The build process yields an "uber-jar", that is a jar containing all the dependencies, which can be called from the command line easily without having to set a correct classpath.

Clarity uses the logback-library for logging. You can enable logging for certain packages by changing src/main/resources/logback.xml.

Watching the data in real time

Clarity Analyzer is nifty little JavaFX Application that lets you see all the entity data in the replay in real time. 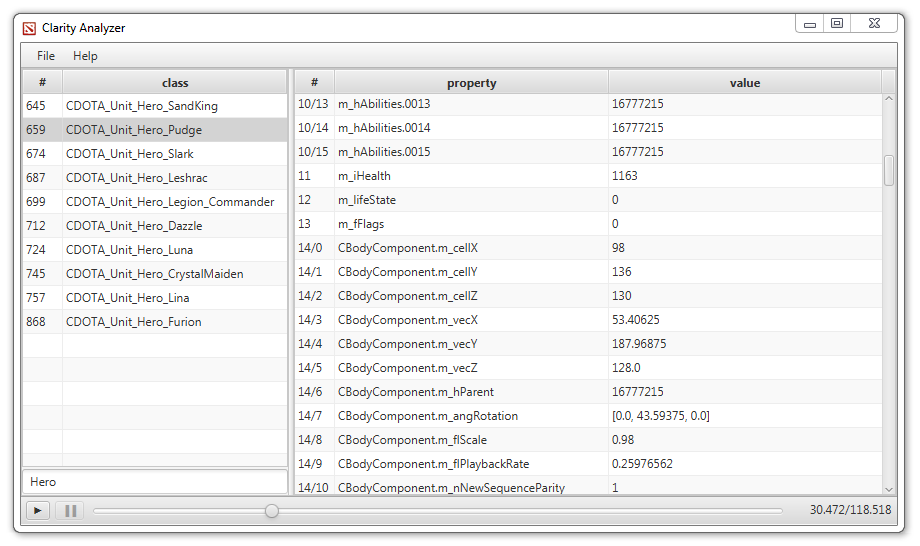 This example almost replicates what is shown on the combat log from the game. It has problems with finding out if some modifier applied to a unit is a buff or a debuff, and it doesn't know how to convert the technical hero names to plain english... but otherwise it has it all :)

You can find it under skadistats.clarity.examples.combatlog.Main.java. After building it from the project root with

Show stats at the end of the game

This example shows how to use the PlayerResource entity as well as the ControllableRunner. It outputs the score table at the end of the match. For getting to the result as fast as possible, it does not run the complete replay, but instead uses the ControllableRunner to directly seek to the last tick in the replay.

You can find it under skadistats.clarity.examples.matchend.Main.java. After building it from the project root with

This example shows how to write a processor that provides events related to the lifestate of an entity. The processor provides 3 new events (@OnEntitySpawned, @OnEntityDying and @OnEntityDied) and an associated main class that uses them.

After building it from the project root with

For retrieving the basic game information (players, picks, bans, who won), you do not need to iterate the replay. You can retrieve that info with the following code

You can find this example under skadistats.clarity.examples.info.Main.java. After building it from the project root with

Since the Dota client is constantly changing and improving, there is no fixed format for what data (properties) these entities contain. To be able to replay a replay recorded on an old client on a newer version, the replay contains definitions of exactly what entities with what properties it contains. These definitions are called send tables.

This example shows the format of the entity data in a certain replay.

You can find it under skadistats.clarity.examples.dtinspector.Main.java. After building it from the project root with

and it will open a window which lets you explore the send tables in an interactive manner.

Clarity is driven by a small annotation driven event system. Clarity provides basic events, like @OnMessage, which is used to get a callback whenever a message of a certain type is found in the replay.

If you want, you can subscribe to those events directly, for example to create a dump of the replay.

But those events can also be used to listen for certain data in the replay and refine the raw data into more sophisticated events. One example from Clarity is the GameEvents processor, which listens for raw messages of type CSVCMsg_GameEventList and CSVCMsg_GameEvent and transforms their content into an easier to use form:

Another example for creating your own event provider is a provider for spawn / death events.

The first parameter on any event listener called by Clarity is a Context object. You can use it to do useful stuff: