I have talked about EIP Designer at Red Hat - L'Entreprise Numérique - 2016 Paris on March 23st. Here are the slides of the prez.

I have talked about EIP Designer at SiriusCon 2015 Paris on December 3rd. Here are the slides of the prez.

A Sirius designer for Enterprise Integration Patterns (see http://www.enterpriseintegrationpatterns.com/ for introduction of what are EIP). It allows you to design integration routes using the common patterns and vocabulary used within Enterprise Application Integration or Enterprise Services Bus solutions.

Here's an overview of the design perspective : 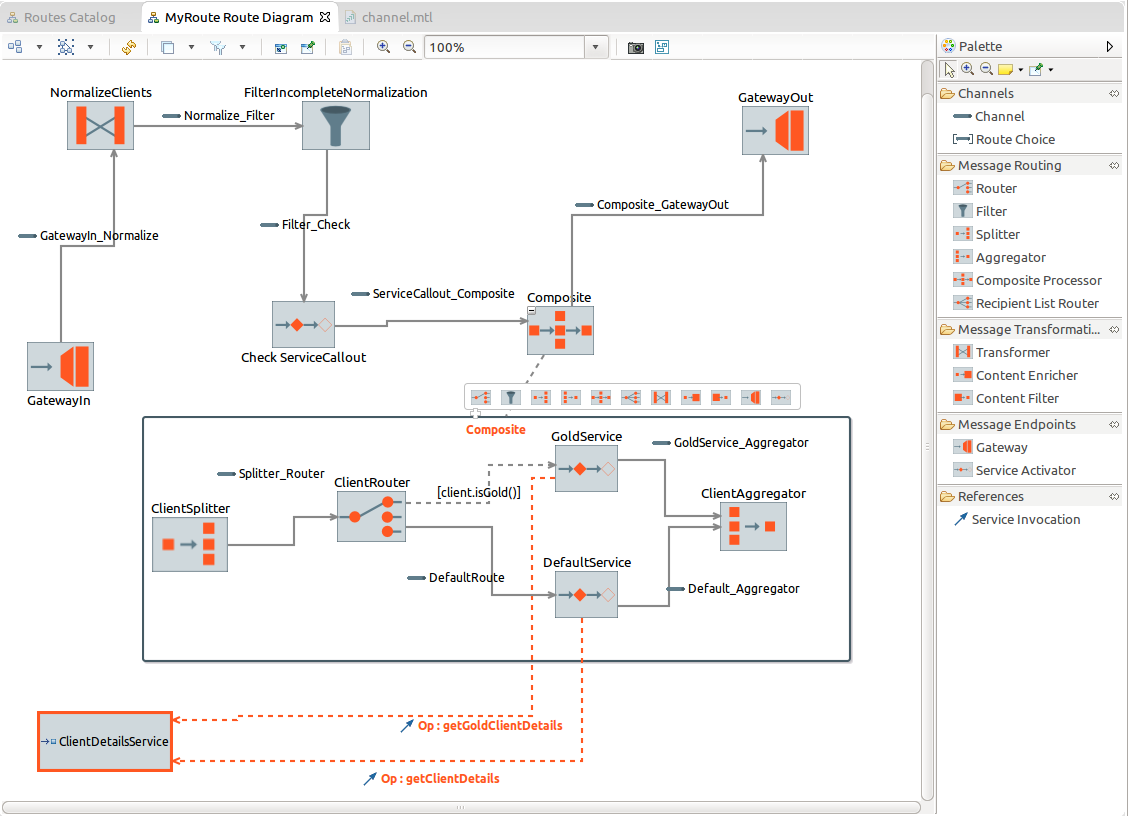 Moreover designing routes, the goal of EIP Designer is also to give :

Finally, we aim to provide adapters and bridges to allow the usage of EIP Designer from a more generic and abstract design solution such as a TOGAF or a Archimate Designer. Those one presenting the notion of Services and Services dependencies without a mean of describing orchestration process or integration routes ... everything we thought EIP is great at !

If you're looking for a deeper introduction on solution and project genesis, we invite you reading this InfoQ's article.

After having installed and ran Eclipse, you also need to add Sirius 2.0. See the download page on http://www.eclipse.org/sirius on how to add Sirius to your Eclipse modeling installation.

EIP Designer has been developped and tested on following configurations.

Find the correct update site URL in the above Releases table and just use this URL as an update site into your Eclipse installation within Install New Software.... More details on available features are mentioned below when talking about Usage, Generators and Bridges.

Want to live on the edge ? The development version of EIP Designer could either be :

For early testers, snapshot P2 repositories are regularly setup and provisioned here: http://dl.bintray.com/lbroudoux/maven/eip-designer/. Just use this URL to see if there's a snapshot for current version and use URL as an update site into your Eclipse installation within Install New Software....

In order to build from sources, you'll need Apache Maven (version >= 3.0). After having cloned the Github repository, just go to the repository root and run :

This should build and install all binary plugins into your Maven local repository under the com.github.lbroudoux.dsl.eip group / sub directories.

After having cloned the Github repository, just launch Eclipse and do a regular projet import (Import... > Existing Projects into Workspace) of all the projects located under /plugins and /features directories.

Using designer is rather simple and follow Eclipse Modeling and Sirius guidelines :

We provide a new viewpoint simply named Enterprise Integration Patterns and applicable when your project contains a *.eip resource as shown below. 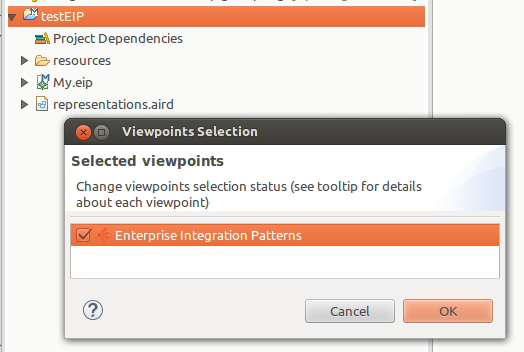 Your project is now ready !

Check our Wiki documentation on how to use generators.

Once features mentioned into Generators section are presents, comparison of implementations files with base model is made available through a new Compare With EIP Route context item within the traditional Compare With... submenu.

Then, select a Route definition within an EIP Model present into your workspace and you should be able to inspect differences onto a quite standard Compare dialog : 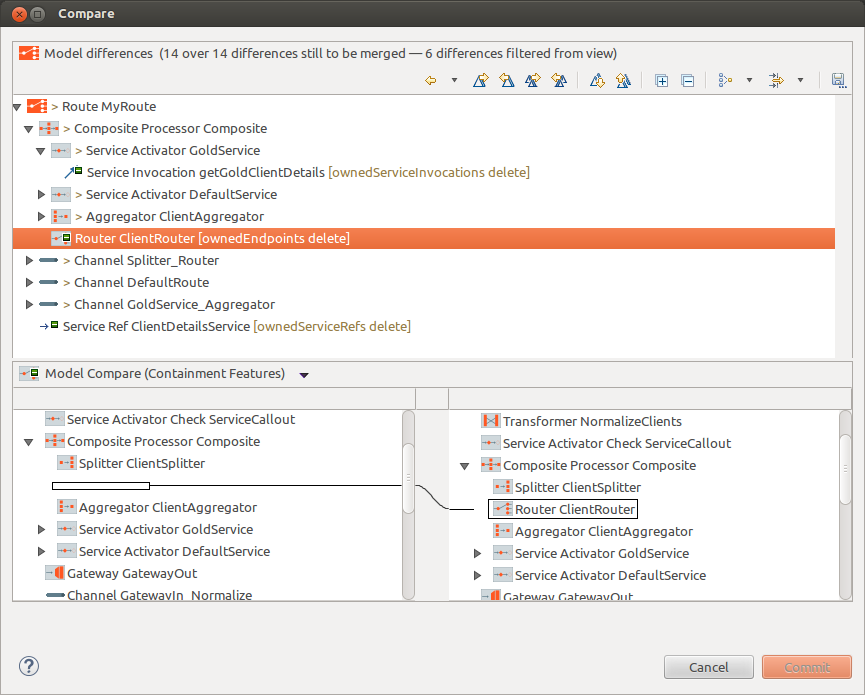 Check our Wiki documentation on how to write a custom bridge !

As an example, we provide a bridge for the TOGAF Designer from Obeo. This feature brings you a new contextual menu contribution for designing EIP route from Togaf Information System Service within diagrams as shown below : 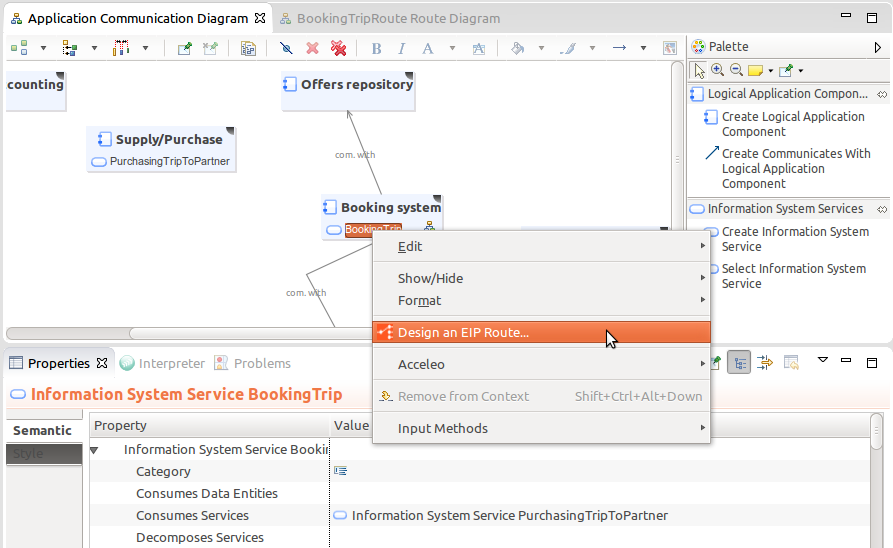 As soon as you have choosen a target EIP Model as the container for the Service Route design, it initializes a complete EIP design for the Service realization and by bringing in every service dependencies identified within Togaf designer : 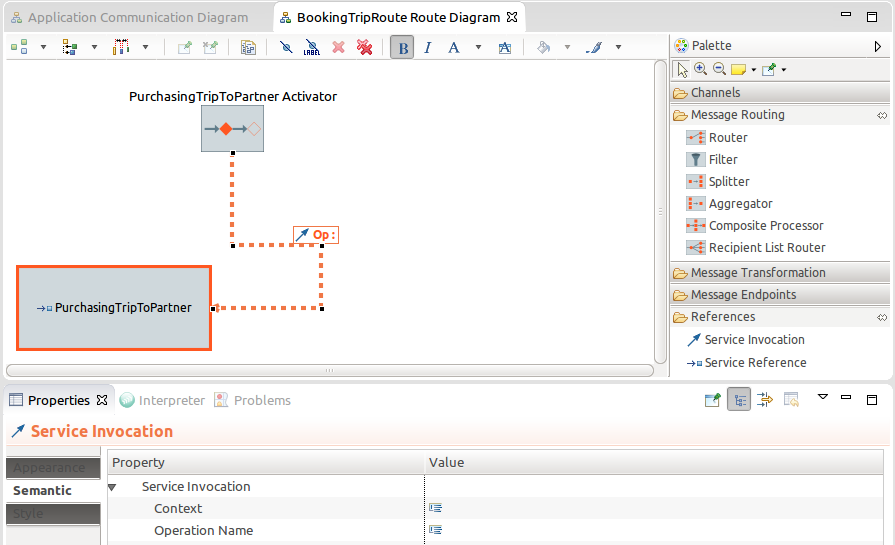