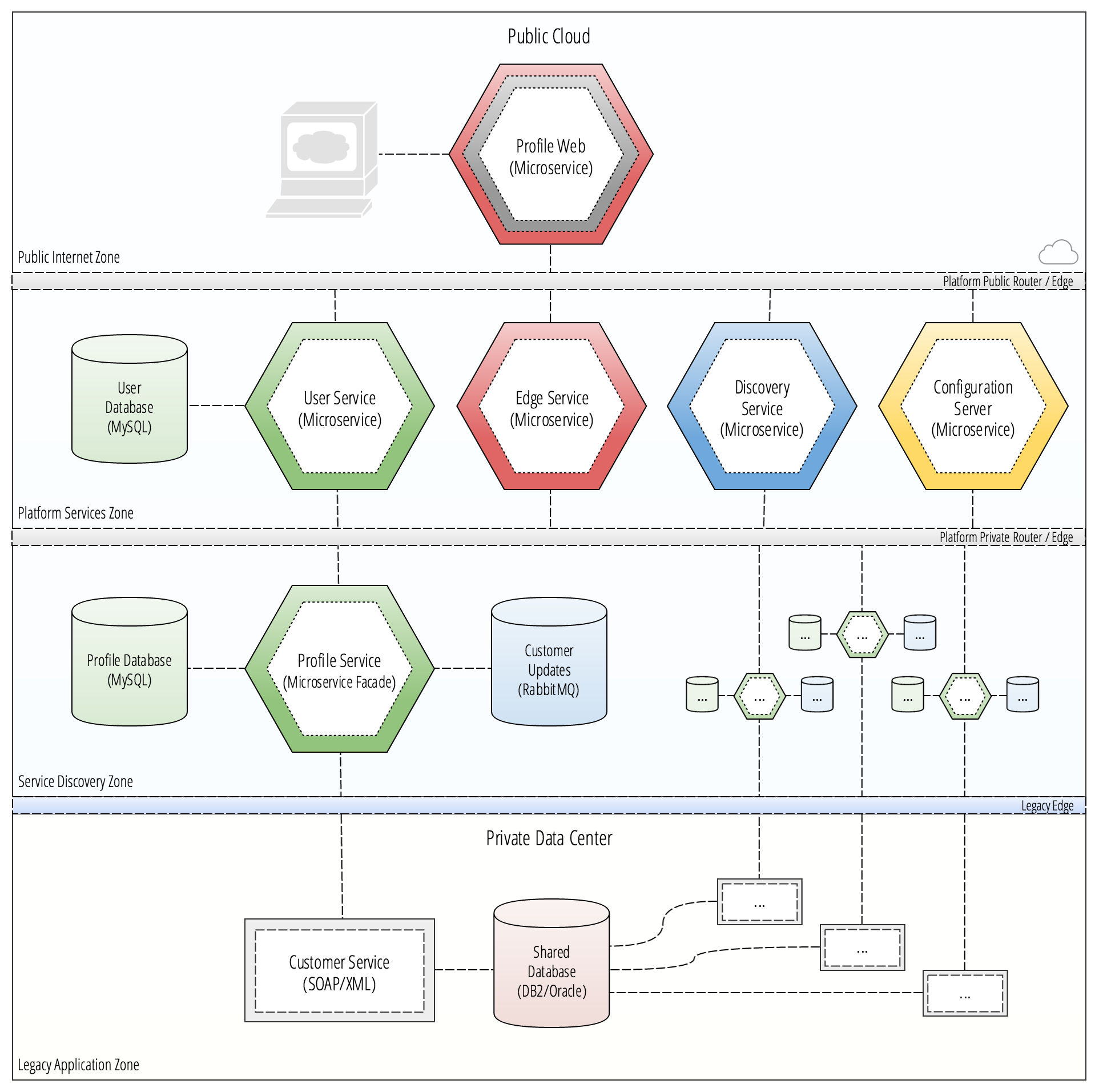 This reference application is based on both common and novel design patterns for building a cloud-native hybrid architecture with both legacy applications and microservices. The reference project includes the following applications.

When building microservices, the general approach is to take existing monoliths and to decompose their components into microservices. Instead of migrating all legacy applications at once, we can allow an organic process of decomposition to drive the birth of new cloud-native applications that strangle data away from shared databases used by legacy applications. The cloud-native strangler pattern focuses on the complete replacement of a monolith's database access over a period of time.

There are two ways to run the reference application, with either Docker Compose or Cloud Foundry, the latter of which can be installed on a development machine using PCF Dev. Since the distributed application is designed to be cloud-native, there is a lot to be gained from understanding how to deploy the example using Cloud Foundry.

To run the example using Docker Compose, a run.sh script is provided which will orchestrate the startup of each application. Since the example will run 8 applications and multiple backing services, it's necessary to have at least 9GB of memory allocated to Docker.

WARNING: The run.sh script is designed to use Docker Machine, so if you're using Docker for Mac, you'll need to modify the run.sh script by setting DOCKER_IP to localhost.

To run the example using Cloud Foundry, a deploy.sh script is provided which will orchestrate the deployment of each application to a simulated cloud-native environment. If you have enough resources available, you can deploy the example on Pivotal Web Service. If you're new to Cloud Foundry, it's highly recommended that you go with the PCF Dev approach, which you can install by following the directions at https://docs.pivotal.io/pcf-dev/.

When you have a CF environment to deploy the example, go ahead and run the deploy.sh script in the parent directory of the project. The bash script is commented enough for most to understand the steps of the deployment. Each Cloud Foundry deployment manifest is located in the directory of the application in example project, named manifest.yml. The deployment process will deploy the Spring Cloud backing services first, and afterward, each microservice will be deployed one by one until each application is running.

This project is an open source product licensed under GPLv3.