Listen to vinyl records wirelessly throughout your home using an Android device.

Vinyl Cast is an Android app used to wirelessly stream the audio of a vinyl record player (or any audio source for that matter) to Google Cast-enabled (Chromecast built-in) devices or groups.

Note: The initial release of Vinyl Cast included using Audio ACR to detect the song being played, but unfortunately this feature relied on a now discontinued third-party library/service so the feature was removed. Other options are being explored to add this feature back to Vinyl Cast in the future.

The record in the app spins when actively streaming. 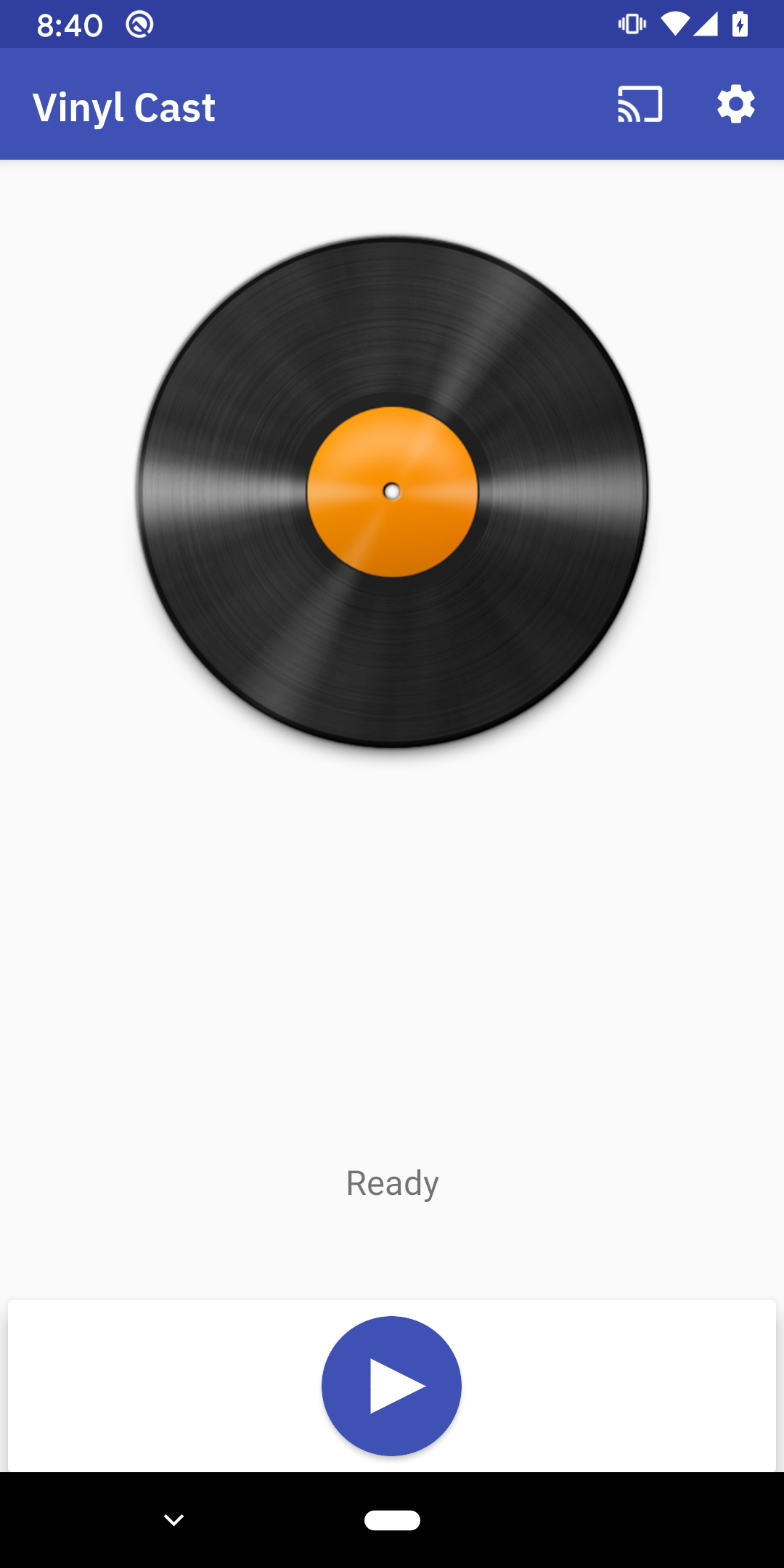 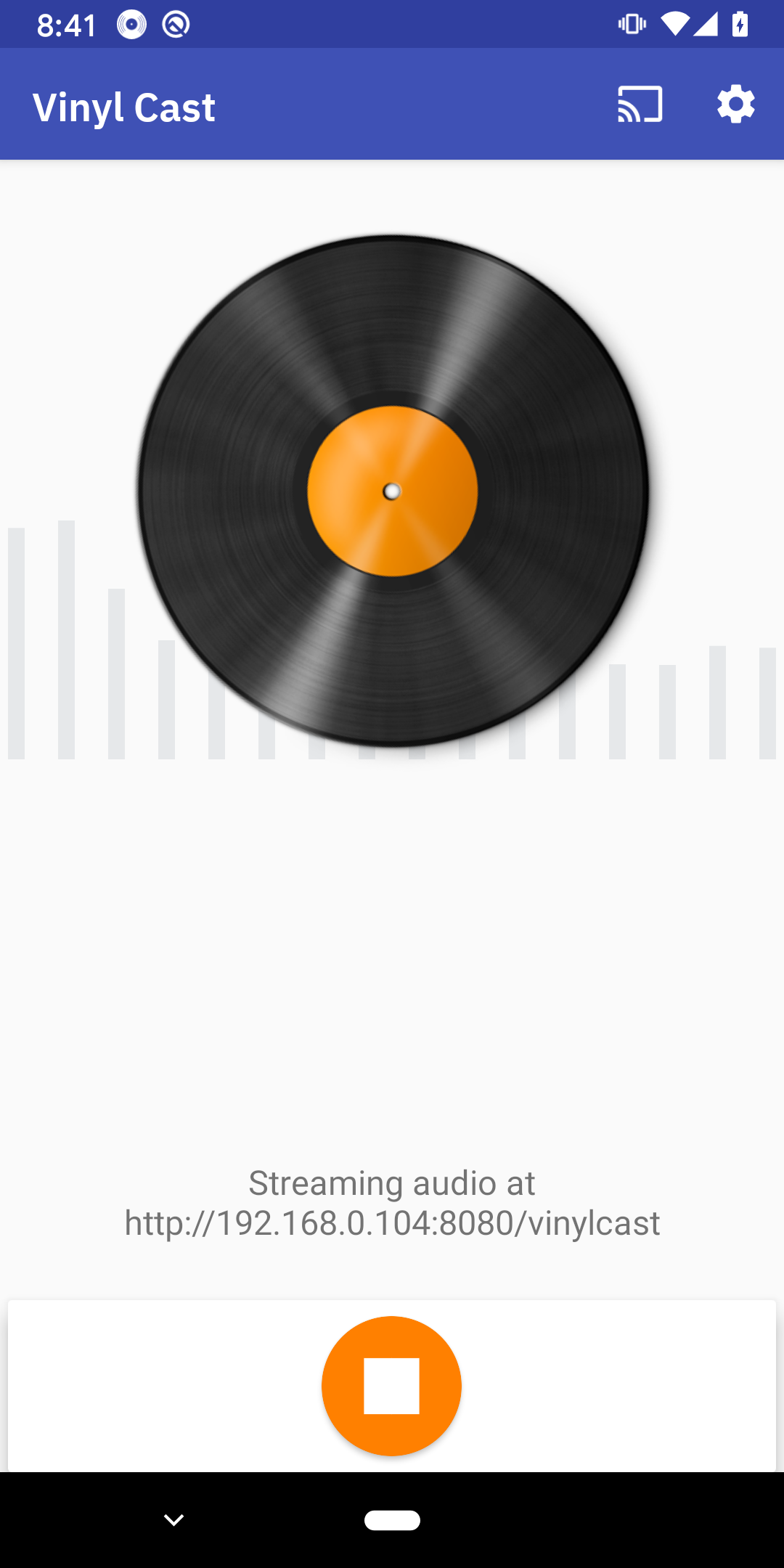 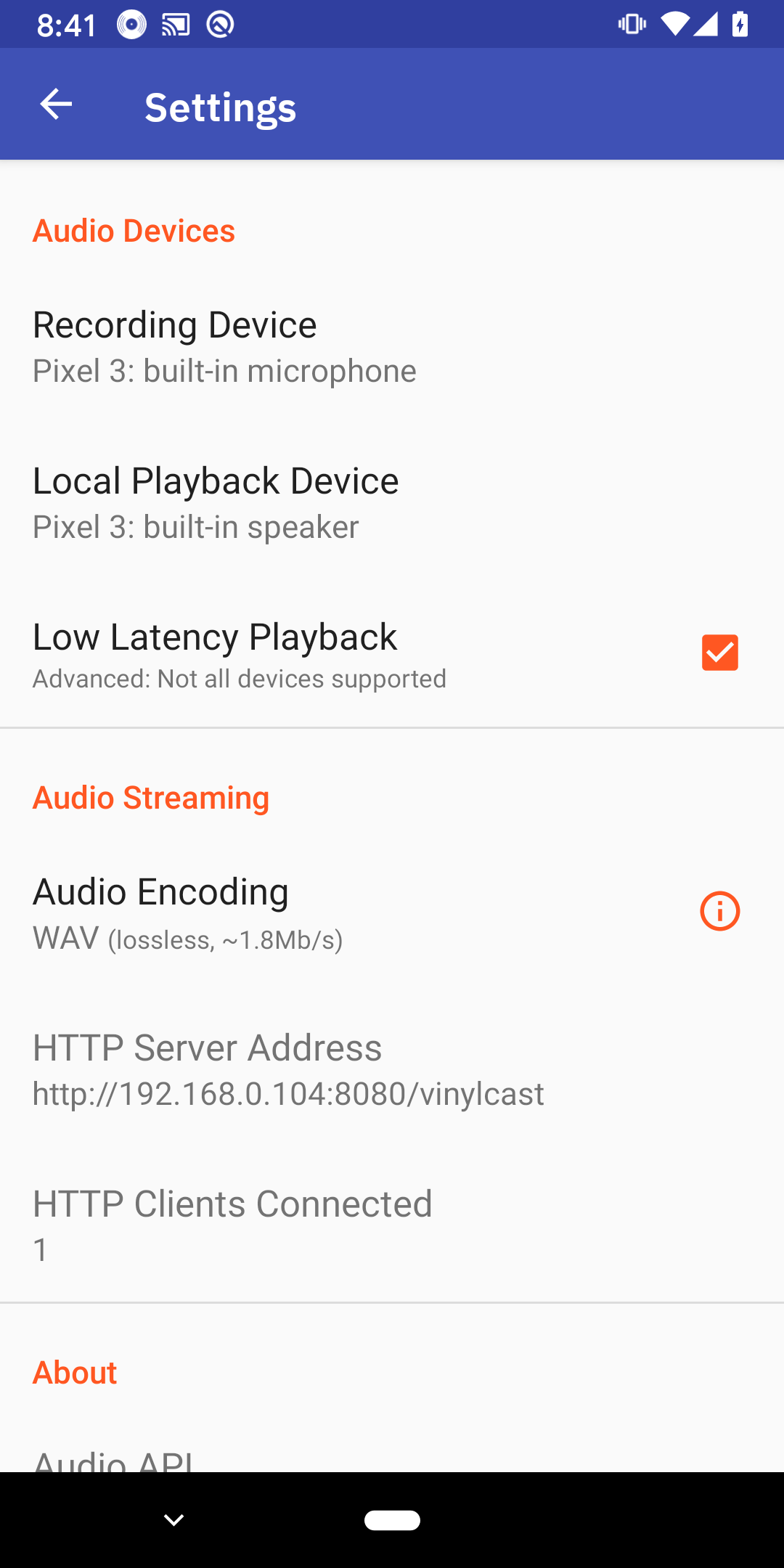 An Android device will be used to capture raw audio from your record player (or any analog audio source), perform audio format conversion (if selected), and act as a webserver to stream the digital audio stream to Cast-enabled devices. The Vinyl Cast app currently requires an Android device running Android 6.0 or later.

The app was developed and testing using a Nexus 6, Pixel 5C, and Pixel 3.

A USB audio interface is used to capture the raw audio from your Audio Source (e.g. record player) and make the analog audio stream available for recording/streaming by the Vinyl Cast app. If your analog audio source includes a USB interface, you can use this. If your record player only has analog audio output, I would recommend the Behringer UCA202 (without pre-amp), Behringer UFO202 (with pre-amp), or Dynasty ProAudio DA-UA2D (standalone pre-amp with USB interface).

The app was developed and tested using a Behringer UCA202.

The USB adapter you need depends on the type of USB connector your Android device has (usually how you charge the device). If you have USB-C connector on your Android device, you'll need a USB-C to USB-A female adapter. If you have USB Micro-B connector, you'll need a USB OTG adapter from USB Micro-B to USB-A female. Note that USB adapters are now often included in the box with new Android phones to help transfer data from an old device (e.g. Pixel devices include a "Quick Switch Adapter" going from USB-C to USB-A female). Otherwise you can purchase one separately that should look like this USB Micro-B OTG cable or like this USB-C adapter.

An adapter with power passthrough like this one can be extra useful to be able to charge your Android device while also connected to your USB Audio Device.

You'll need an audio source (e.g. a vinyl record player) to provide audio input to the Vinyl Cast app. If you're not familiar, it could look like this.

You'll need a Google Cast-enabled (aka Chromecast built-in) device hooked up to speakers to receive and playback the audio streamed from the Vinyl Cast app.

The app was developed and tested using a Google Home, Chromecast Audio, and Chromecast (2nd Generation).

The hardware should be set up as expected with the goal of recording audio from audio source via the Android device and wirelessly transmitting the audio to a Cast-enabled device.

With the app installed and hardware setup:

The vinyl record image will rotate to signify that the app is actively recording/streaming and a real-time spectral plot from the FFT of the raw audio (like a Graphic EQ) will give real-time feedback of the audio input.

Tap the record again to stop the stream or access controls via the Android playback notification.

The app provides two choices for audio encoding: WAV and AAC. If AAC is selected, the app converts the raw 16 bit PCM stereo audio data captured from the USB audio device at a sample rate of 48kHz to an AAC LC 192kbps encoded stream with ADTS headers which is sent via HTTP 1.1 chunked transfer encoding.

Add Audio ACR to detect the current song being played and display the related metadata.

The song metadata is determined via audio acr (automatic content recognition) using fingerprints of the raw audio stream which upon successful matching, provides rich metadata for display and storage. The playback history is then stored in a local database for future features around sharing and analysis.

Check out what's playing from the notification bar or lockscreen.

The app can scrobble the listening history to Last.fm or update a user collection in Discogs or send out a tweet when a new record starts playing.

With the raw audio stream, can add sound effects to the live stream [insert record scraaaatttch] or record loops of audio for later use.

When a track is detected, there are additional traits available including genre, tempo, time progress, etc. Idea is to create insights into listening history data like what genre has been played the most, what record has been listened to the most or least, what's the favorite record for Tuesdays.

Since the Android device used is connected via USB to a record player, it's not very mobile while streaming. A client app can be created to run on a more-mobile device to display the latest metadata, access quick controls to pause/play, and even fetch playback history.

If the track is detected, can give a warning based on track number and track progress time to notify the user that the side is about to be finished and will need to be flipped.

This seems like a prime use case for an Android Things device to handle USB connection to record player and streaming audio. Android Things Developer Preview 2 did add support for USB audio devices.

During development, I attempted to use a Raspberry Pi 3 and Android Things DP 3, but routinely encountered a buffer overflow in the audio record thread. I did not investigate this issue any further.