An external tool to export or delete selected chunks and regions from a world save of Minecraft Java Edition.

Update 1.11 adds new features that can be useful when migrating a world to 1.16. Here is a document with some tips and tricks regarding 1.16.

For people who prefer watching a video to understand how the MCA Selector works, there is a very nice tutorial on Youtube explaining the basics:

Executing the tool, it shows an empty window with a chunk and a region grid. To actually show a world, open a folder containing Minecraft Anvil (*.mca) files. The tool will then render a top-down view of this world that you can zoom into and zoom out of by scrolling up and down and that you can move around using the middle mouse button (Cmd+LMB on Mac OS) or using WASD. 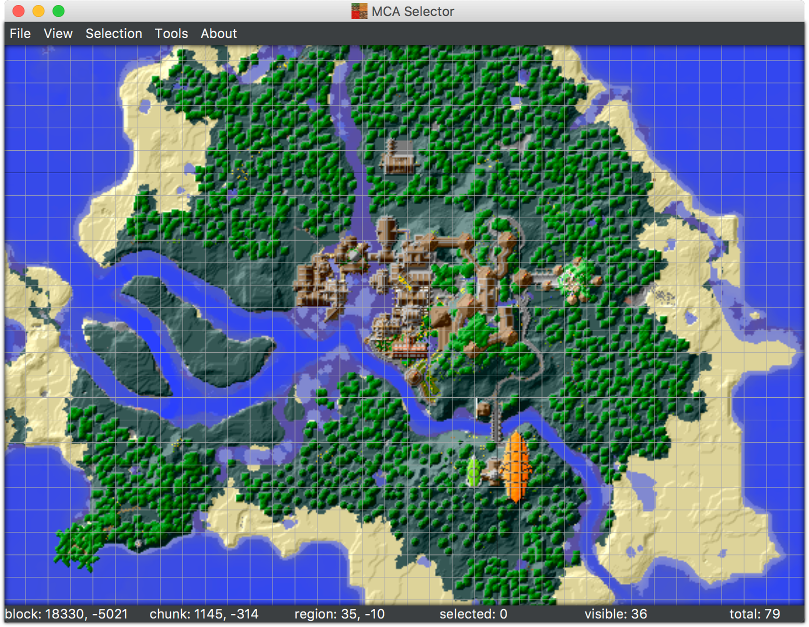 Zooming out far enough disables the selection of single chunks but lets you select entire regions. 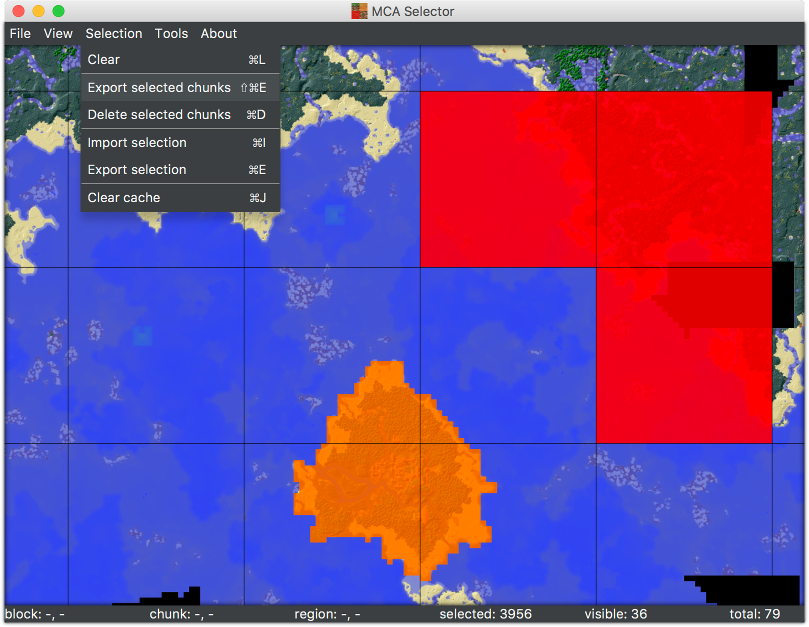 A selection (not the chunks and regions themselves) can also be exported or imported and even be applied to different worlds.

The MCA Selector also contains a powerful tool to delete or export chunks and regions by conditions like the data version, the time it was last updated, how much time players have spent in this chunk and some more. Multiple of these conditions can be used to create a very specific query describing what chunks and regions should be deleted or exported. 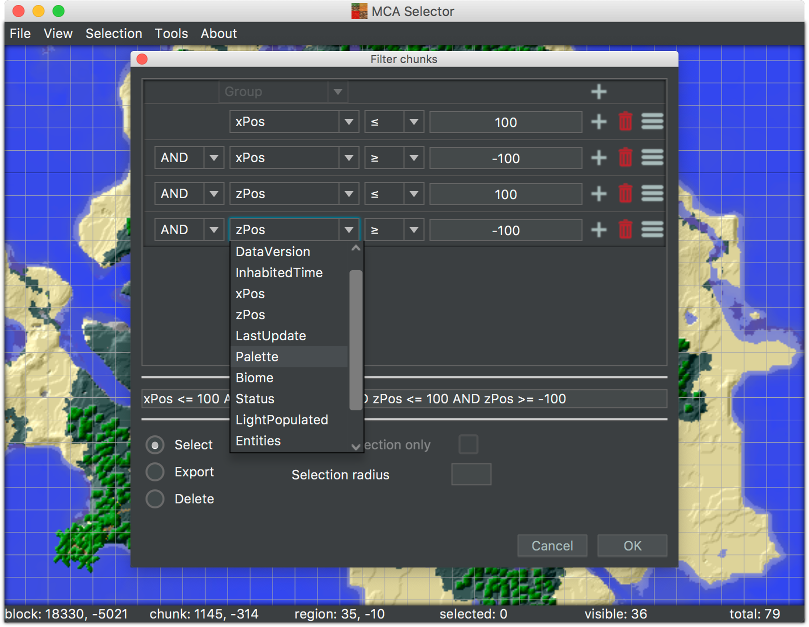 Because the conditions use internal values used by Minecraft, the following table gives a brief explanation on what they do:

Fields that allow multiple comma separated values act the same as multiple consecutive filters of the same type with single values connected with the AND operator.

Notice Running the query will check the .mca-file's name first if the query would even apply to any chunk in this file using the xPos and zPos conditions, as long as the query is built in a way that allows doing this. 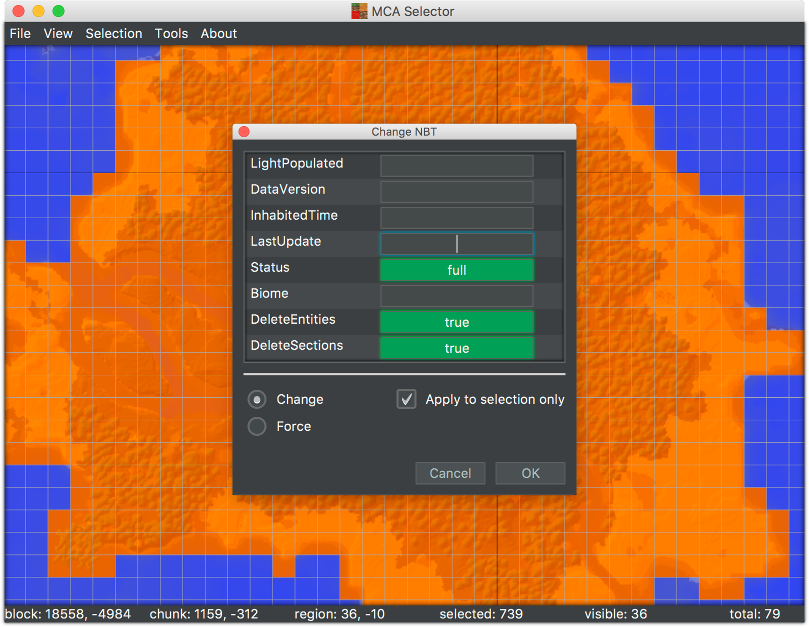 You can change the following values:

Once the field is highlighted in green, the value is considered valid and will be changed. A gray field, no matter its content, will be ignored.

When selecting a single chunk, the menu "Edit chunks" becomes available. It allows precise editing of the entire NBT structure of that chunk. Names and values can be changed, added, deleted or moved (drag & drop). 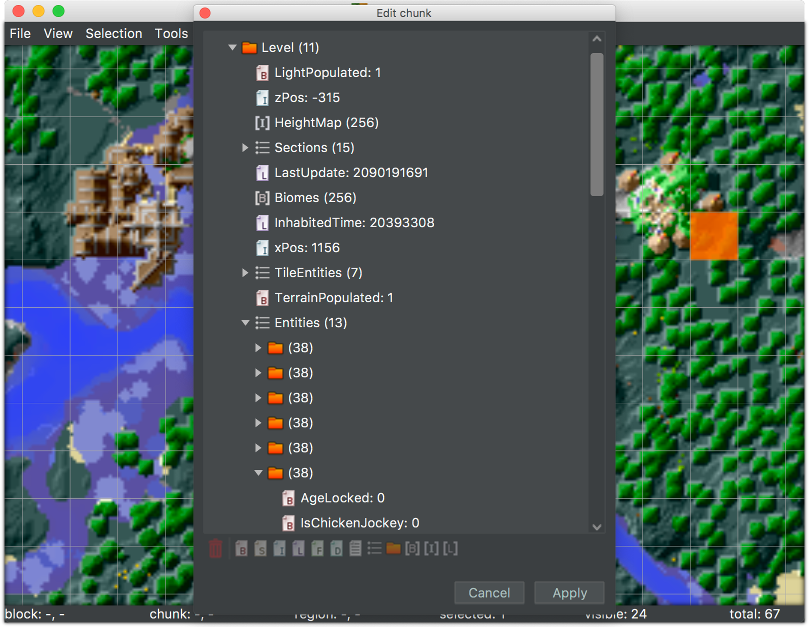 Notice When the NBT editor does not show any data, the cached top-down view might be outdated, and the chunk might not exist anymore in the mca files. In that case, clearing the cache will re-render the regions from scratch and show the up-to-date top-down view.

Importing chunks can be easily done by opening the target world first using File --> Open and then merging the chunks of a second world using Tools --> Import chunks. After selecting a folder containing region files, it is possible to import the chunks with a bunch of additional options. 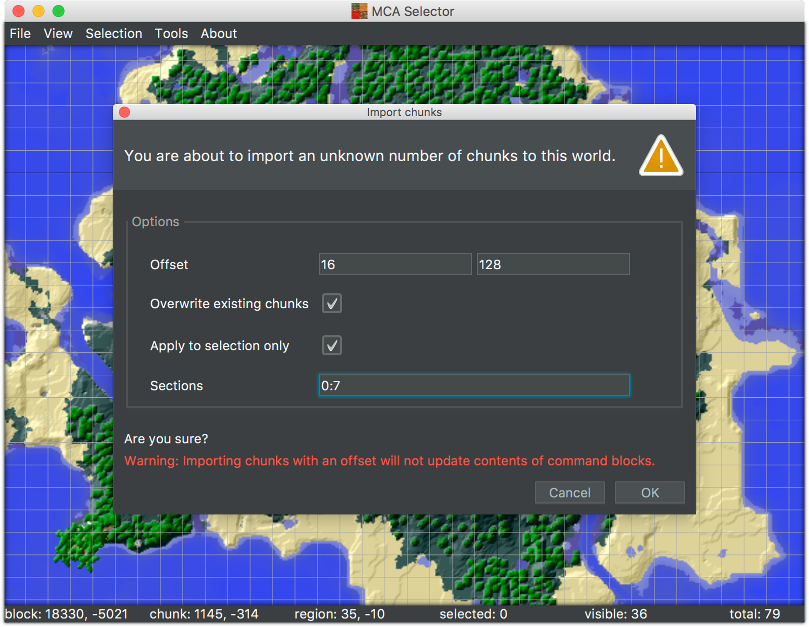 Notice Commands inside of command blocks will not be changed. Maps will not be updated, because their data is not stored inside region files.

When exactly two chunks are selected, they can be swapped using Tools --> Swap chunks. This is useful for corrupted region files when Minecraft failed to correctly save the region file index, resulting in scrambled chunks.

The tool creates an image for each region from the provided mca-files. These images are saved separately inside a cache-folder in the working directory of the program for future usage. Experience showed that a Minecraft world with a size of 10GB resulted in cached image files with a total size of 80-100MB. Caching as many regions as possible significantly improves loading times though.

If something is not working properly or if you want to see the exact query that is run using the chunk filter, debugging can be enabled in the settings. It will print useful information about what the program is currently doing to the console.

There is no guarantee for worlds generated in a Snapshot version to work, even if it is specified in the table above. This only represents the current development status towards the next Minecraft release. Old Snapshots of past Minecraft releases are not supported.

A filter query is a text representation of the chunk filter that can be created in the UI of the program. It is shown in the text field below the query editor of the Chunk filter tool. Example:

This will select all chunks that contain sand and water blocks and their x-position ranges from 10 to 20. As shown, double quotes (") must be escaped with a backslash, in a way specificed by your command-line shell.

The query for changing NBT values in chunks looks slightly different to the filter query. It is a comma (,) separated list of assignments. Example:

This will set the field "LightPopulated" to "1" and "Status" to "empty". Just like the filter query, the query to change values is printed to the console when using the UI in debug mode.

To build a standalone jar file on Mac OS or Linux using the Gradle Wrapper, run

The UI language of the MCA Selector can be dynamically changed in the settings. The following languages are available:

If you would like to contribute a translation, you can find the language files in resources/lang/. The files are automatically detected and shown as the respective language option in the settings dropdown menu once they are placed in this folder.

If you have Java from Oracle installed on your system

Most likely, .jar files are associated with java on your computer, it should therefore launch by simply double clicking the file (or however your OS is configured to open files using your mouse or keyboard). If not, you can try java -jar mcaselector-1.11.1.jar from your console. If this doesn't work, you might want to look into how to modify the PATH variable on your system to tell your system that java is an executable program.

If you have Minecraft Java Edition installed on your system

Minecraft Java Edition comes with a JRE that you can use to start the MCA Selector, so there is no need to install another version of java on your system. On Windows, that java version is usually located in C:\Program Files (x86)\Minecraft\runtime\jre-x64\bin\ and once inside this folder you can simply run java.exe -jar <path-to-mcaselector-1.11.1.jar>. On Mac OS you should find it in ~/Library/Application\ Support/minecraft/runtime/jre-x64/jre.bundle/Contents/Home/bin/ where you can execute ./java -jar <path-to-mcaselector-1.11.1.jar>.

WARNING: For macOS 10.14+ (Mojave) It is NOT recommended to use the JRE provided by Minecraft (1.8.0_74), because it contains a severe bug that causes JavaFX applications to crash when they lose focus while a dialog window (such as the save-file-dialog) is open (see the bug report here). This bug has been fixed in Java 1.8.0_201 and above.

If you are using OpenJDK

If you are using Java 11 or higher

If you are using Java 11 or higher, the JavaFX modules are not included automatically. You will need to include them by specifying the module path for JavaFX. Some examples are included below, but you may need to edit paths if your system stores the JavaFX modules in a different location.

On Windows with Oracle Java 13:

On Debian with OpenJDK 11 and openjfx:

If none of these instructions work, apply "A brain" that you providently held ready after having read the "Requirements" section carefully.